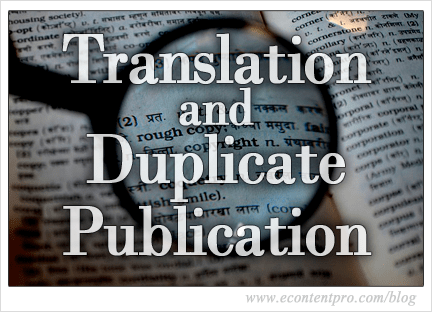 Sometimes the lines between what is ethical and unethical are blurred, and when book or journal editors aren’t very clear about general publishing rules, authors may find themselves in a dodgy—or even legal—dilemma.

Let’s talk about duplicate publication. For the most part, it’s simple; duplicate or “secondary” publication is the republication of copyrighted, authored content, and it’s unacceptable. An author submits a manuscript—or portions of it—that has been previously published by a different press.

In the world of academia where most research and publishing endeavors are international in scope, it can be tempting for many to redistribute their valued research papers in a different language. Not only that, but many scholars are multilingual, and they crave for their published ideas to be properly translated and received by as much of a worldwide audience as possible.

The solution? Full disclosure. Although the intellectual work is yours, copyright law dominates the publishing landscape, with your reputation on the line for even the thought of infringing. Although the work is yours, it’s under copyright, meaning that although a secondary publication may not seem like plagiarism, it technically is; it’s self-plagiarism.

Still, most publishers understand cases in which a paper needs to reach the widest possible audience, through republication either in another language or in another, more localized journal.

In an article by Yue-Hong (Helen) Zhang in the Journal of Zhejiang University, it is suggested to any author who’s considering translating their text and publishing it elsewhere to evaluate the following three points of reference.

As touched on before, after a paper is published in one language, authors should not only get permission from the primary journal editors out of common academic respect, but more lawfully, from the original publisher. According to Dr. Zhang, some international journals may already have provided an authorization clause within the text of the signed author contract that transfers the copyright.

What’s more, authors must disclose their intent to translate their original text and indicate exactly how much of the translated text is a duplicate of the originally published material. “Such action is regarded to be free of copyright suspicions, faithful to the primary version, and free of any academic misconduct,” says Dr. Zhang. Peer reviewers and Editors-in-Chief affiliated with the secondary publication should be made aware of the previous publication as well as the formal approval from the publisher and editor of the primary publication. Only then can they ethically decide whether the content of the translated manuscript is relevant, meets their quality standards, and is worthy of a secondary publication.

2. Achievement and Evaluation for Advancement

If approval is granted and the “bilingual” publishing moves forward, authors still must be wary of unethical uses. Although this original research has been published twice, it should only be counted once by relevant scholarly boards, research panels, or personnel departments in an advancement evaluation simply because the initial publication originally broke the research, while the secondary publication is merely a translation.

Yet, it should be noted, translations are considered “creative works of language” with “long-term cultural benefits,” according to Dr. Zhang, so the secondary publication can actually serve as a reference for language skills in the rare cases that authors don’t need the assistance from an experienced, professional translator.

One of the most rewarding aspects for scholarly authors is the academic clout achieved when included in a prestigious index. Therefore, a translated, duplicate publication can possibly reap rewards for authors in this respect because numerous indices of international journals include content of a wide range of languages, so duplicate abstracts might actually appear in the same database. Yet, some of the most prestigious indices around the world—such as Scopus and Clarivate—only file abstracts in English.

So, to resolve this query about translation and duplicate publication, republishing a manuscript that was previously produced in another language is indeed considered duplication and infringes on copyright law unless specific conditions are satisfied: editors of both journals are informed and agree; proper approval is granted from both the publisher that holds the copyright and the secondary publisher; and in general, all parties who review the paper are made aware of its new, translated version because, as Dr. Zhang says, “Although bilingual (multilingual) publication is theoretically reasonable, it will undoubtedly have to be defined as a duplicate publication which is not to be commended if the publishing processes are not transparent.”