Commonly Misused Phrases and Expressions in the English Language 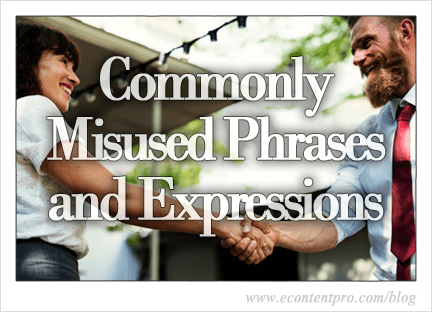 Do you have a phrase, saying, or expression that you find yourself using often in casual conversation? Or, do you notice your peers sometimes using funny sayings or idiomatic phrases? We all have certain “go-to” expressions that are almost always a natural part of everyday conversations, but are we positive that they’re being used correctly?

It’s easy to become a culprit of repetitive language slip ups, especially as you and those around you become conditioned to saying common phrases a certain way. Still, it’s always best to learn more about the language you’re using and strive towards speaking grammatically correct. After all, don’t deny the fact that you’ve at least in one moment or another made a mental note of someone’s grammar mistake.

Nonetheless, if you’re unsure about how you’re using everyday phrases, fear not; we’ve generated a list of commonly misused expressions that will help you tidy up your tête-à-têtes.

If "regardless" means “despite everything,” as pointed out in the Merriam-Webster dictionary, then "irregardless" also means “despite everything.” Simply put, these words mean the same thing, but that doesn’t mean that you should go around using both. “Irregardless” seems to have popped up in colloquial language merely out of misguided usage. Yet, in reality, the two negatives connected to the ill-advised word, “ir” and “less,” effectively cancel each other out. The short story? Use “regardless.”

That’s right; you’ve probably been saying this incorrectly for your entire life. Just thinking about this offhand, no one would ever question the accuracy of “another thing coming,” but in fact, this expression originates from a centuries-old retort: “If that’s what you think, you’ve got another think coming.”

Both of these phrases are correct, but you may have been using this inaccurately. “Intensive” in this case simply acts as an adjective describing the “purposes.” So, if you’re distinguishing that the purposes are in fact “intensive,” then by all means, use this phrase. However, most people intend to say something like, “in regard to everything of significance and all practical senses.” In these cases, use “for all intents and purposes.” Our explanation here was purposefully intensive, no pun intended. Here’s one final remark on this: Microsoft Word now recognizes this error in its spelling and grammar check functionality.

This comes down to how you’re attempting to present yourself and your speech. Both of these words are correct, and both are in the dictionary. Still, using “anyways” is considered significantly more relaxed and egalitarian than using “anyway.” In professional settings, we recommend paying closer attention to what you’re saying, and drop the “s.”

Without giving this one much thought, it’s easy to misuse. Basically, saying “tongue and cheek” is nonsensical, and can only be construed as something that was said involving some facial contorting. The correct phrase—“tongue in cheek”—is commonly used to describe an expression that’s witty but also ironic or sarcastic in nature. Think of the term cheeky, which means being sassy or facetious.

To many, this phrase seems like a silly idiomatic expression. What do images have to do with spitting? It turns out that the roots of this phrase are holy. In the Bible, it’s been commonly interpreted that God created Adam in his own image solely out of “spit and mud.” Over the centuries, this evolved into a metaphor for parents “spitting” to create children who have uncanny likeness to them. The contemporary misreading of the phrase then morphed into “spitting image,” but the true statement remains “spit and image.”

Many of us are guilty of using the wrong version with this. It’s a lapse in using negatives the right way. If you’re attempting to express that you really don’t care about something, saying “I could care less” is actually communicating something contradictory. Think about using “could” versus “couldn’t.” If you already don’t care about something, saying that you “couldn’t care less” would be the appropriate phrase to use to tell someone that you, truly, just don’t care.

It’s difficult to determine what “one in the same” might actually mean since the prepositional phrase “in the same” is far too vague when paired with the already ambiguous noun “one.” It’s assumed that in the case of this misusage, many people have misinterpreted the pronunciation. The correct phrase—“one and the same”—is usually used to signify that two ostensibly different individuals are in fact the same person. Take the following example for instance:

The woman wearing the elaborate hat and Queen Elizabeth were one and the same.

This one comes down to exactly where you’re “nipping.” The verb to nip means to squeeze, squash, or compress. So, if the meaning behind the essentiality of this phrase is to stop or silence something early on, then “nipping in the butt” wouldn’t quite fit the intended implication. Using this incorrect version would just translate to scolding someone or touching inappropriately. A bud however is the new manifestation of a fruit or plant, so “nipping in the bud” properly fits the intended usage.

Wrong Usage: “Should of"
Right Usage: "Should have"

We use this combination of words all the time when we speak, so this phrase is particularly important to use correctly. The main reason that people slip up with this one is because of the way the contraction sounds. “Should’ve,” when articulated quickly, indeed, sounds like “should of.” Yet, bad habits aside, the grammatically correct way of saying this phrase is “should have.”

No, these do not mean the same thing, but please; don’t be a nervous wreck. Although understandably interchanged, “wreck” and “wrack” are quite different. If something were “nerve-wrecking,” it would mean the same thing as “nerve-destructing.” The correct word usage in this expression—wracking—means troubling or distressing. Funny enough, it’s also acceptable to say “nerve-racking,” since the verb with or without the “r” are actually 100% interchangeable.

Realizing that you, among many of us, have been erroneously using these common phrases is the first step. With minor adjustments and self-awareness, you can start to confidently communicate these everyday expressions; we bet you’ll even stay on top of using the right spelling. Don’t hesitate to pass on your newly found understanding of these common linguistic blunders.