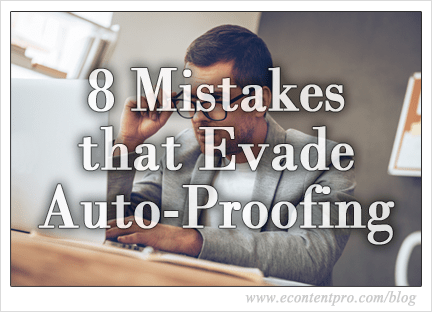 Grammar checkers can only catch what is obvious. Software developers can’t possibly code a program to detect all errors in the limitless act of writing. It’s always recommended to run your program’s proofing option, but after years of experience copy editing and proofreading all kinds of documents, the team at eContent Pro has identified eight common writing mistakes that seem to slip through the cracks of the grammar-checking programs on our computers.

These two personal pronouns are often used wrongly and interchangeably, mostly because many people don’t realize that even though using “I” may make your wording sound more formal, that doesn’t mean it’s the correct usage. The easiest way to know when to use which one is to remove the other person from the sentence altogether and then repeat the remaining phrasing to determine what makes sense. Your computer can’t do this.

The most trouble in discerning which to use occurs when one or the other is combined with another personal pronoun. Take the following for instance:

“Me” in this instance is incorrect because it doesn’t make sense as the subject. The same comes to light for “I” when used as an object. Here it’s used with a name:

Computers typically prompt you to change or auto-correct “whose” to “who’s.” Yet, the dichotomy with these two is clear, and it’s important to know when to use which one. “Whose” is the possessive of “who,” while “Who’s” is the contraction for “who is.” Just like “hers” or “yours,” “whose” is a possessive pronoun without an apostrophe. See the correct usages:

Indicating “who is”: Who’s going to the party tonight?
Possessive: Whose drink is on the kitchen counter?

For some reason, auto-correct and grammar checkers have difficulty pinpointing which form should be used, and these are frequently missed. The first one is simple; two is a number.

Too is the trickiest one. It has two meanings: “overly” and “also.” In the first case, “too” can be thought of as qualifying something in an exaggerated way, most commonly used in the phrases “too many” or “too much.” Its second usage can usually be substituted with “also.” So, if you’re unsure, replace the word, and determine if it makes sense:

Correct: My mom likes to drink coffee before work, and I do too.
Incorrect: My sister always takes the remote control, but it’s my house to.

Lastly, “to” is used in every other way: as an infinitive, as a direction, and as many others.

It’s always been my dream to drive race cars.
I have to make dinner.
Come over to my house.

See all three used in one sentence:

Nick ate too many potato chips, and now I have to go buy two more bags.

Some will say that there are clear rules for comma usage, while others realize that it’s more of a gray area. It all comes down to intent, and copy editors who can accurately identify the author’s intent are invaluable. Computers and programs—even with the most sophisticated algorithms—will probably never be able to truly be sure of the writer’s intent.

Say you would like to talk about your brother who lives in California. If you have five brothers, you might say:

My brother who lives in California just got a new job.

If you only have one brother, but simply want to be descriptive and put your statement into context, you might say:

My brother, who lives in California, just got a new job.

The second usage shows that the phrase within the commas is not essential to the meaning of the sentence as a whole.

Here are two more examples. Both are correct, but each is used with a different intent:

The first uses “you know” as a colloquial expression, while the second changes the subject of the sentence to “you,” emphasizing the fact that the person being addressed already knows that it’s hard for “me” to sit still for long periods of time.

Simply put, “alot” is a misspelling of “a lot.” Computer programs will never pick up on this mistake because “a lot” could easily mean “a parking lot,” or a “lot of land.” Nevertheless, it should always be spelled as two words when intended to mean “many” or “a high quantity.”

“Alot” is not even a word. If used as one word, people may think you’re attempting to say “allot.”

With most misunderstandings of word usage, commonly, the answer is found by examining what exactly is the subject of the sentence. What’s more, to decide whether “imply” or “infer” is the correct usage, you have to determine the nature of the subject. In this case, that would mean figuring out if the subject is communicating or listening.

The person communicating—speaking or writing—implies. The receiver of the message—listener—infers. When you imply, you indirectly say something. When you infer, you’re understanding the message; you’re interpreting. Implications are discrete expressions, while inferences are realizations of meaning between the lines. Since either use is so dependent on the context of the situation, only an engaged human will be able to accurately proof your writing.

The “ly” usually attached on the end of adverbs can confuse people, especially if you’re not a native English speaker.

These adverbs are different from adjectives in that they don’t describe nouns or pronouns. Most usages are straightforward, but a few can make writers scratch their heads. Here are a few forms that exemplify some common mistakes not typically corrected by auto-proofing or grammar-correction software:

Unknown to even some of the most active writers, the misplaced participle may be the most frequently used error. In sum, it’s an abrupt shift in meaning, or a misleading transition.

But first, what is a participle? A participle is a form of a verb. Although they have a variety of uses, in subordinate clauses, these participles can be misused because, by their very nature, subordinate clauses depend on a main clause for their meaning. Hence, if used incorrectly, they become “misplaced.”

How do you recognize when you’re using misplaced participles? To begin, it’s best to explain by example:

Did you really intend to say that Vincent was aging in oak barrels? The problem is that the participial phrase, “aged in oak barrels,” is not intended to describe Vincent, but rather, the red wine. Readers expect a logical flow to your phrasing, so instead of leaving the participle out of place, it should be changed to one of the following:

Although these mistakes are typically missed by your computer’s proofing software, that doesn’t mean it’s time to call Microsoft Word a blasphemous and inoperable writing program. These instances of grammar slip ups should encourage you to be more vigilant if you’re used to solely relying on those red, green, and blue swiggly lines. The best advice? Have a fresh set of eyes, someone with a knowledge of grammar, look over your text. More often than not will you realize these trivial mistakes go unnoticed.