When to Use Who or Whom 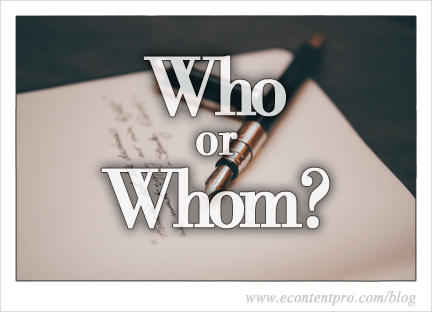 Who and Whom as Relative Pronouns

As you can see, both examples are used to link one clause to another.

Consider the Subject Versus the Object for Who and Whom

Who as a Subjective Pronoun

Examples of using who as a subjective pronoun follows.

Whenever “I”, “she” or “he” feels right, who can be used. Examples follow:

Whom as an Objective Pronoun

Examples of “whom” in a sentence:

Who and Whom in Formal and Informal Settings

In informal writing and speech who is used most of the time. Usually people say “Who do you want to speak to?” Even though whom may sound dated, it is still the technically correct word in many situations. “To whom do you wish to speak?”

Following is an example of a formal and informal sentence.

Even though contemporary usage is typically used when speaking, the traditional usage is still used in formal writing. For example, the following greeting is still quite common in formal letters:

Helpful Tips for Using Who and Whom

Who and Whom Summary

Who and whom each have a specific role in a sentence, so it is necessary to understand their functions and use them correctly. While using who rather than whom might not be as obvious, using whom incorrectly may give the impression a person is trying to sound more educated than they really are. If the individual uses whom incorrectly, then they do quite the opposite of coming across as an educated individual. Therefore, it is crucial to learn the differences, practice them, and use them confidently.

To ensure that who and whom, as well as the correct forms of all words, are being used in your writing, be sure to check out our copy editing and proofreading services. Our expert editors will ensure your work is grammatically sound.