When to Use a Semicolon 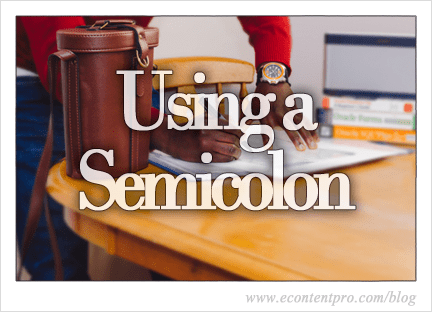 A semicolon is a punctuation mark that can sometimes be confusing to writers. In this post, we will take a look at the various ways to properly use semicolons in your writing.

Semicolons can be used to separate two independent clauses.

Perhaps the most common use of a semicolon is to link two separate, independent clauses that could stand as grammatically correct, fully formed sentences on their own. The caveat to this rule is that the clauses must be related. For instance, the phrases, “I hurt my knee,” and “I have a hard time walking,” are two clauses that could be complete sentences on their own and are also related.

You could use a semicolon to connect these phrases in this case.

If your clauses were unrelated, such as “I hurt my knee,” and “I have paid my hospital bill,” you would not be able to use a semicolon.

Semicolons can be used to list items that contain commas

If you are writing a list of items that contain commas, you can use a semicolon to separate the items in your list. For example, if you were to say, “We get visitors from Seattle, Washington; Portland, Oregon; and Sacramento, California,” you would be able to use a semicolon as a “super comma” to show the separation between the three cities in your list.

Semicolons can create variety in your writing

Semicolons are a great way to create variety in your writing. If you find yourself writing multiple short, choppy sentences in a row, you can always use a semicolon to create a longer sentence that stands out from the rest. An example of these can be seen in the sentence below.

Rules for Using a Semicolon

With every tool in the English language, there are rules of use, and the semicolon is no different. We have explained each of these rules below.

Never use a comma when a semicolon is needed

This mistake is known as a comma splice. This occurs when a comma is used to connect independent clauses that do not include a coordinating conjunction.

Avoid using a semicolon when a comma is needed

The problem with our first sentence is that the first part, “Since I hurt my knee,” is not an independent clause and could not stand on its own as a sentence, so there is no need for a semicolon.

Be sure that your independent clauses are related

As we have mentioned, you cannot use a semicolon to connect two unrelated independent clauses, although these can appear together as separate sentences.

Do not capitalize ordinary words that appear after a semicolon

You will want to be sure that the word after the semicolon is not capitalized unless it is a proper noun.

Do not use a semicolon when a colon is needed

A colon is used to introduce a series of things, such as what you are having for dinner, or to give example(s). Be sure not to use a semicolon here, as it will not properly distinguish your list.

Be sure that if you are writing a list of items that contain commas, you are using a semicolon between each list unit to distinguish them from one another. If you do not distinguish your individual list units, you run the risk of your sentence becoming a jumbled mess.

Final Thoughts on the Semicolon

A semicolon is an excellent tool to add to your writing toolkit, as it will enhance your writing when used correctly. If you have any questions about semicolons and their use, let us help you. eContent Pro has trained, professional copy editors who can fully resolve all issues with your writing. They will identify and correct mistakes that go far beyond the use of semicolons, and they will ensure your writing is grammatically sound, across the board, from start to finish. Learn more about our copy editing and proofreading services.