When to Use a Hyphen 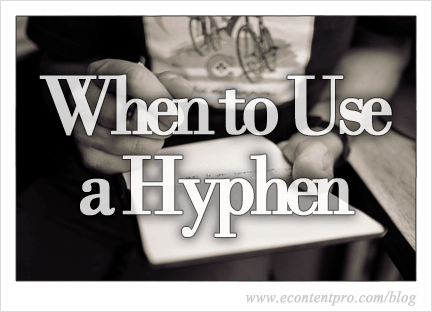 A hyphen is a commonly used punctuation mark, although its proper usage is often misunderstood. The primary function of a hyphen is to glue words together by showing their relationship.

When Should You Use a Hyphen?

To create a compound adjective

If these compound adjectives were used in a sentence after the noun, they would not need to be hyphenated. Examples:

Some well-established compound adjectives are always hyphenated, such as our all-star example.

If you are using a new, original, or unusual compound noun, you will want to use a hyphen to avoid any possible confusion.

To show a period of time, such as an age

You can use a hyphen to help distinguish any periods of time that you may have in your writing.

Do not interchange with dashes

When using a hyphen, you will want to ensure that you are using a hyphen and not a dash. The hyphen can be found on most standard PC keyboards as the bottom symbol on the key between the 0 and the = sign.

No spaces around hyphens

The adverb “very” and adverbs ending in “-ly” are not hyphenated

With this rule, you cannot use the word very or an adverb that ends in -ly as part of any compound adjectives that would need to be hyphenated. An adverb is defined as: a word or phrase that modifies or qualifies an adjective, verb, or other adverb or a word group, expressing a relation of place, time, circumstance, manner, cause, or degree (e.g., gently, quite, then, there).

If you are using a prefix in your sentence, and the root word begins with the last letter of the prefix, hyphenate the word.

If you are using the prefix re-, and the final word could be confused with another existing word, you will need to add a hyphen to show which word you mean.

If you believe that your word will be jumbled or lose some of its intended meaning without including a hyphen, then you can add one without breaking any writing rules.

Hyphenate all compound numbers from 21 to 99, all spelled out fractions, and don’t hyphenate fractions introduced with a or an

You will need to put a hyphen into any compound numbers or spelled out fractions.

You will want to be sure that you do not include a hyphen in any fractions that are introduced by “a” or “an”.

When you are using a proper noun that consists of two words, you should not include a hyphen.

Hyphenate all words beginning with the prefixes self-, ex- (in this case, meaning former), and all-

Ultimately, when you are confused about whether to use a hyphen, you should look up the word that you are trying to use. If you are still confused, let us help you. eContent Pro has professionally trained copy editors who will review your document for correct hyphen usage, as well as a multitude of other writing problems. Learn more about our copy editing and proofreading services.