When to Use a Dash 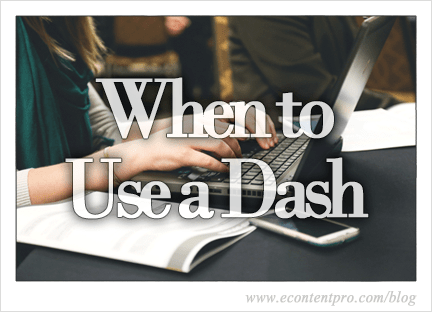 When you think about punctuation marks, it is not often that your mind wanders to the dash. The dash has two types, the em dash and the en dash. We are going to explain exactly what each of these dashes are and the proper way to use them within this post.

What Is an Em Dash?

The em dash is one of the most versatile punctuation marks in the English languages and can be used in place of other punctuation marks depending on the context they are used in. Having too many em dashes in your document can get confusing, so it is best to limit yourself to no more than two em dashes per sentence. This mark is made by typing two hyphens back to back and is as wide as the M key on an old-fashioned typewriter. To type an em dash on a Windows computer, you can hold down the “Alt” key and hit 0151 or hold down “Ctrl” + “Alt” + the number pad “-.” To type an em dash on a Mac computer, you can hit “Option” + “Shift” + “Hyphen.”

Uses of an Em Dash

As we stated above, the em dash is one of the most versatile punctuation marks that you can use in your writing and can be used in place of commas, parentheses, or colons, depending on their context. We have looked at each use of an em dash below.

Em Dashes Instead of Commas

You can use a pair of em dashes in place of a comma to add clarity or to enhance the readability of your document. The em dashes will always add more emphasis to your text than commas will, so be sure to keep this in mind when writing.

Em Dashes Instead of Parentheses

A pair of em dashes can be used in place of parentheses. Em dashes are considered less formal than parentheses and add more emphasis to the content that is contained within them. Let’s review some examples below.

Both of these sentences are grammatically correct and show us the same information. In the second sentence, we are putting more emphasis on the names of the kids that are graduating, whereas in the first sentence, their names are just information we have included.

Em Dashes Instead of Colons

The em dash can be used instead of a colon when you want to add importance to the conclusion of your sentence. Keep in mind that the dash is less formal than a colon. We have provided examples of this below.

Example of Replacing a Colon with an Em Dash:

Two em dashes can be used back-to-back to show that segments of a word have been omitted either intentionally or because they are unknown. When an entire word is missing, you can use two or three em dashes back-to-back, but be sure that you are keeping this consistent throughout your writing.

Example of Replacing an Omitted Letters with a Em Dashes:

What is an en dash?

An en dash is another dash that is smaller than the em dash yet longer than the hyphen. It is as wide as the N key on an old-fashioned typewriter. Many computer keyboards lack a specific key for the en dash, but you can insert one into your writing by holding down the “Alt” key and hitting 0150 or holding down the “Alt” key + the number pad “-” on a Windows computer or by hitting the “Option” + “Hyphen” keys on a Mac. An en dash is most commonly used to show a range of numbers.

When Should You Use an En Dash?

You Can Use an En Dash When You Are Writing Scores

Example of Using an En Dash in a Score:

You Can Use an En Dash Between Words That Show Conflict, a Connection, or Direction

Example of Using En Dashes to Show Conflict, a Connection, or Direction:

The Red Sox–Yankees rivalry is one of the best rivalries in sports.
The New York–Munich flight is seven hours and thirty minutes long.
The river flows from East–West.

Things to Keep in Mind When Using Dashes

When you are using dashes in your writing, it is important to remember the different types of dashes and what each one is used for. Additionally, you will want to remember to space the dashes correctly. When using either a hyphen, an en dash, or an em dash, you will not want to include a space on either side of the dash.

Final Thoughts on the Em Dash and the En Dash

The em and en dashes are two punctuation marks that can be confusing, but can be very versatile when used correctly. If you are unsure of yourself when it comes to using these dashes, let eContent Pro help. Our professional editorial team will review your document and evaluate proper usage of each type of dash, as well as a variety of additional grammar and writing issues. Learn more about our copy editing and proofreading services.