How to Use Lists in Your Writing 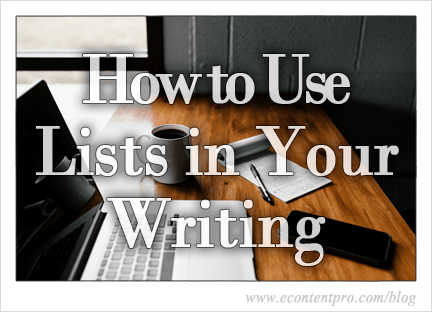 There are many different styles and formatting expectations when writing academically, but keeping your prose organized isn’t one of those variations; it’s a predominant rule of thumb. One of the most commonly used but often poorly executed methods of presenting text in a structured way is using lists.

It’s a method that’s being used more frequently and looked upon more favorably because people tend to skim more than they read word-for-word. Some publishers have clear guidelines for creating lists in your text, but generally, as long as you're consistent throughout the document, following our advice hereafter for using lists in your text can help keep your manuscripts organized without puzzling your readers.

Be Aware of All Your Lists

There are actually four different types of lists that writers can use, and most of us use these in different ways without being conscious of it:

Build run-in lists throughout your manuscript with a purpose. Fist, use semicolons either if one or more listed item includes internal commas, or if you set up the list with a colon. Academics may tell you that the constructions of built-in lists aren’t necessary because they can be explained in separate sentences. However, a list is meant to demonstrate that a handful of ideas are unified in some way. Therefore, in subtle instances, you can easily incorporate a delineated, cohesive list without pulling it out of the text. On a final note, be sure that run-in lists are structured logically. This will ensure uniformity and avoid leaving the reader wondering how your list connects to the broader scope of your paper.

When order or sequence is important, use numbered lists for items that you’d prefer readers to take more of a substantial notice to. Like all display lists, numbered items that are pulled out will draw the eyes of your readers. More significantly, the content will be easier to read and to scan through. In particular, explaining complicated concepts in your research papers can become less of a burden by arranging chronological points of discussion as various lists. Instead of attempting to string together intricate ideas within consecutive paragraphs, simply format a numbered list and introduce your explanations in logical chunks of underlining text.

Use Bullets to Explicate Points in Your Text

Bulleting, like numbered lists, helps to illustrate your ideas more clearly. They’re effective when order doesn’t matter but a group of discussion points are still related. Don’t hesitate to bullet items that are important takeaways, but also be mindful of how many times you’re pulling discussion points out of your lined copy. You don’t want your paper to read like a memo. With bulleted lists, logical organization is key and can make following your critical thinking, argument, or explanation of research less taxing and more convenient for the reader. Arrange subtopics under main bullet points using Microsoft Word’s bulleting function. Yet, note that in scholarly writing, academics generally expect explanations to be offered in a series of thoughtful paragraphs, so bullets should be used to complement your discussion and serve as a tool to help organize your thoughts for the reader.

With no relation to the listing of information sources and citations, this type of list is often underappreciated and can be quite useful in organizing your writing. For instance, say you have four different terms, descriptions, or subcategories to discuss under the broader umbrella of a main topic. A reference list can be created using the a), b), c), d) formatting in order to “reference” a particular item. The reader will be introduced to the item first, and then a more meaningful connection can be made by using it as a reference point.

Why should you use a list? It’s simple—organization for the reader. Lists, whether run-in or displayed, will be a tool to help break up lengthy, concept-loaded paragraphs. Outline important points of discussion or complement a carefully explicated argument in the aforementioned ways in order to draw the reader’s eye to the points that really matter.