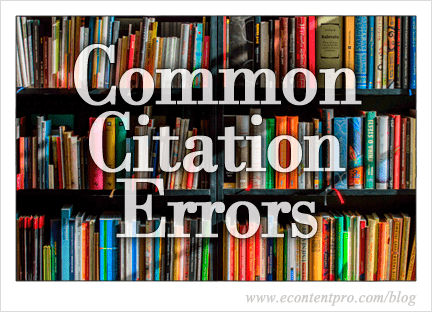 When crafting a research paper, resources are one of the top priorities. Spending time to gather the best resources that can truly bolster your content can increase your chances of receiving a positive reception from editors and getting published. Nevertheless, the sloppy use of citations and a compilation of references that’s ridden with errors can result in seriously negative impressions of your paper.

Although it’s common to experience fatigue when finishing up your manuscript, don’t let it compromise your potential success. Learn from some recurrent problems that our copy editors run into.

As you know, a reference list of all sources that you used to gather information for your research paper is an essential part of any ethical publication. Usually, it’s better to err on the side of including too many sources, rather than not enough. Sometimes though, a disconnect happens between a source listed in the References or Works Cited page and one that’s included as an in-text citation. If a source is cited within the text of your paper, but is missing from the bibliographical information, you’re inadequately referencing to that source. Effectively, you’re mentioning their name or names, but not including the full information for that journal article, book chapter, proposal, interview, data sheet, etc. Imagine if someone quoted an idea that you wrote about, but failed to include the paper that you authored within their references.

Whether quoting or paraphrasing, you are obligated to include a citation if referencing or integrating someone else's ideas.

By the same token, sources listed in the References section, yet neglected from the text, is a common citation error seen by our copy editors on a regular basis. This, along with missing reference listings, can also cause frustration and time held up in the proofing phase for publishers, which reflects poorly on both the editor and you as the author. Our advice? Go through both your in-text citations and your references to ensure that each corresponds with one another. An easier solution? Submit your paper to a professional copy editor, who will clearly identify either missing in-text citations or references that are not cited within the copy of your document.

Another common citation slipup is overlooking the need to include in-text citations for paraphrased content. Paraphrasing—not directly quoting someone else but still using their ideas and original concepts—can help make certain notions easier to comprehend for the reader, or it can simply create a more sophisticated flow to your writing by counterbalancing quoted material. Regardless, whether quoting or paraphrasing, you are obligated to include a citation if referencing or integrating someone else's ideas. When authors are suspected of plagiarism by their editors, peer reviewers, or publishers, it’s most frequently due to multiple instances of paraphrased content that’s not correctly cited.

Those pesky abbreviations are often debated about. How can I use them, and when? Every reference style has its own set of rules. The most common abbreviations used in citations are “ibid,” which means “see the previous source,” and “et al.,” which means “and company.” These abbreviations are sometimes encouraged by publishers in order to shorten page length and for convenience. “Ibid” works well when you’re contiguously referencing the same source, and “et al.” is extremely useful for most research papers, especially for those with extensive reference lists. For both, there’s an important rule of thumb to keep in mind; the full information of the source must be previously stated within the text before they can be used. For using “ibid,” this is obvious, but many authors list in-text citations with “et al.” before actually listing the full citation.

For many of those working on papers in APA style, keep in mind that “ibid” does not comply with APA standards. Also, “et al.” must be punctuated after “al” with a period. This applies to both parenthetical citations and direct in-text citations, whether correlating to quoted or paraphrased text. Parenthetical citations must use a comma after the period and before the date. For example, take a look at the following statements:

Parenthetical: The Maxwell Paper summarily pointed out that the Kyoto model had dangerously diminished our option-space for thinking realistically about environmental policies. (Prins et al., 2016).

In-Text: As noted by Prins et al. (2016), the Maxwell Paper summarily pointed out that the Kyoto model had dangerously diminished our option-space for thinking realistically about environmental policies.

It may be surprising to some researchers that the use of bracketed references, or referring to a source with a number in a square bracket that corresponds to the sequential number of the full citation within the reference list, is disallowed by many publishers, such as IGI Global and Inderscience. In fact, bracketed references are rarely common practice, seen most often in publications affiliated with IEEE (Institute for Electrical and Electronics Engineers). Occasionally, publishers, such as Elsevier, will allow journal or book project editors to determine their own referencing style and general formatting guidelines, and a few scientific publications actually mandate the use of bracketed references. Yet, in APA, MLA, Harvard, and Chicago, stick with the conventional style, and avoid using brackets.

Scholars often develop a bad habit of composing a research paper with reference material that is old and nearly obsolete, which can reflect poorly during the evaluation process by abstracting and indexing lists.

Likewise, various citation styles have quite detailed rules and guidelines in regard to punctuation, capitalization, paragraph layout, and of course, exactly what information needs to be included. Editors often see one citation style being used inconsistently, substituted for another style altogether, or amalgamated with another style resulting in a hybrid method of referencing.

Our best advice? Memorize the patterns. If you work in APA style for the majority of your journal manuscripts, then become familiar with how to correctly cite common types of references, such as journal articles or book chapters.

Simply put, you should always aim to discover the most up-to-date sources. Scholars often develop a bad habit of composing a research paper with reference material that is old and nearly obsolete, which can reflect poorly during the evaluation process by abstracting and indexing lists. How can you expect to release a groundbreaking paper if your research is based on and supported by outdated resources? We advise targeting information that’s been released within the past eight years.

This is about the bigger picture. Take a step back to evaluate all aspects of your reference list. If your paper is positioning a clear argument, it’s easy to find a slew of resources that support your case. However, failing to include references with conflicting viewpoints can be disadvantageous. Sticking to one frame of mind is not only uninteresting, but it demonstrates that you haven’t completed thorough research in your topic area. Consider including resources that contest your argument, and address them head-on. Some researchers call this the process of synthesizing information, and it’s considered a higher level of rationalizing.

With so many rules to keep in mind, creating flawless citations and references may seem like a daunting feat. We’ve highlighted some of the most common citation errors to be aware of, so with a little patience and some practice, you will soon be submitting manuscripts with accurately presented research. Remember, a professional is always there for some extra help.